Within the research area „Catalysts and Mechanism“ for the synthesis of hydrocarbons from hydrogen and CO and/or CO2, the institute is targeting different research questions starting from catalyst level up to the consideration of entire process chains. In particular, catalysts for the Fischer-Tropsch-Synthesis as well as for the methanol resp. direct DME Synthesis are studied in operando/in situ using synchrotron light sources in cooperation with the Institute for Chemical Technology and Polymer Chemistry (ITCP) in order extract valuable suggestions for catalyst improvements from the results obtained.  This also includes the arrangement of several catalysts in a reactor according to the principle of process integration. In case of the DME-synthesis, the thermodynamics of the upstream methanol synthesis is the limiting factor. To overcome this limitation, the single-stage DME synthesis in microstructured reactors is a promising concept: the rational combination of the both catalysts in one reactor allows to shift the MeOH synthesis equilibrium by its direct dehydration to DME which eventually leads to an enhanced COx-conversion and as a consequence to an enhanced process efficiency.

The focal point of the investigations is on the targeted synthesis of spherical and planar multifunctional catalyst systems. The preparative work covers the synthesis of nanoscopic methanol catalyst (e.g. Cu/ZnO/Al2O3) via flame spray pyrolysis as well as the transfer to a suitable spherical and planar form via spray drying (spherical) and ink-jet/screen printing (planar), respectively. Using theoretical models of the catalyst systems, simulation studies unravel relevant properties of the catalysts providing specific suggestions for the catalyst preparation. By implementing and validating these suggestion, the  feedback-loop can be closed and both, models and synthesis can be further optimized.

The direct synthesis of DME from CO/H2-mixtures using different configurations of bifunctional catalysts is investigated within the frame of the DFG priority program 1570.The direct conversion of carbon dioxide/H2-mixtures to DME using rationally designed planar catalyst coatings in microstructured reactors is within the scope of a project funded by the Vector Stiftung. 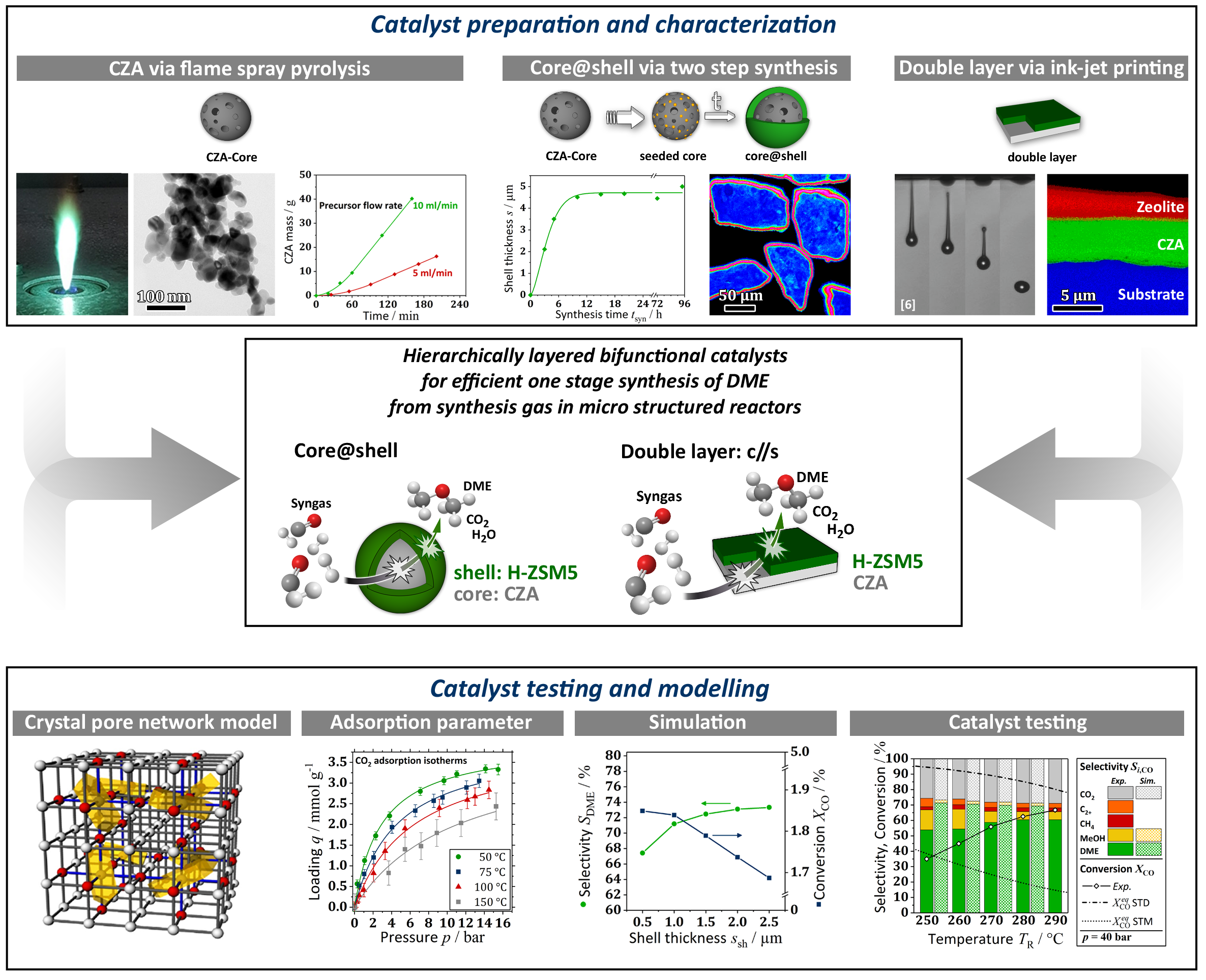